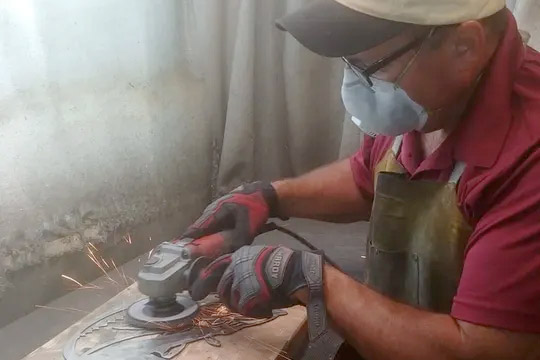 Metal recycling in southeast Michigan takes many shapes — including art

This story was originally published on The Detroit Free Press.

For professional artist Chris Nesbitt, conversations about metal can get heavy, sometimes into the hundreds of pounds.

“The great thing about working with metal is that it’s so durable,” Nesbitt said. “It’s made to last. There’s something satisfying knowing that these works will probably last longer than me.”

Nesbitt is an artist with DunMor Metal Art, a Waterford Township-based full-service decor company specializing in rustic metal art. Founded in 2015 by Nesbitt’s friend Jeremy Macbeth, DunMor makes such products as custom-made art pieces, signs for both the home and business, and Michigan-themed art. Custom DunMor art has been sold around the U.S., as well as internationally.

All work is handmade from raw materials. Mostly, the pieces are crafted from 4-by-10-foot sheets manufactured in Michigan from new metal mixed with metal collected from curbside recycling bins.

“I’m very conscious about the importance of metal recycling,” said Nesbitt, a former chemical engineer. “It’s good to know that metal is getting a second or third life through our art.”

Compared with much of the country, Michigan excels at recycling one type of metal: aluminum. That’s thanks in large part to Michigan’s first-in-the-nation bottle and can deposit law, which tacks an extra 10 cents onto the cost of each carbonated beverage sold in the state, to be redeemed later for a 10-cent refund.

More than 90% of bottles and cans that carry a deposit are recycled, but such returnable containers represent only 15% of all the waste Michiganders recycle every year. Almost 53% of the state’s municipal solid waste that goes to landfills could instead be recycled if done properly.

State leaders say Michigan needs to do a better job recycling its metal — as well as its paper, glass, cardboard and plastic. The state’s current 15% recycling rate is the lowest in the Great Lakes region and ranks among the lowest nationwide.

That’s why this summer, the Michigan Department of Environment, Great Lakes, and Energy, known as EGLE, launched Know It Before You Throw It, a first-of-its-kind statewide education campaign to better inform Michiganders on how to recycle correctly and what can — and cannot — be recycled.

‘A win-win-win for everyone’

EGLE’s goal is to promote awareness of cleaner recycling practices to reduce the amount of contaminated materials improperly going into recycling bins. The state also wants to double Michigan’s recycling rate to 30% by 2025 and ultimately reach 45% annually.

Achieving EGLE’s 30% recycling goal would produce a total of as many as 12,986 jobs, which translates into an economic impact of up to $300 million annually, according to the Expanding Recycling in Michigan Report prepared for the Michigan Recycling Partnership.

The Know It Before You Throw It campaign features the Recycling Raccoon Squad, a six-member team of recycling champions who serve as EGLE’s education ambassadors. EGLE-commissioned research shows that education is key in order for residents to learn how to properly recycle.

“By learning a few simple rules, we can elevate our rate of recycling, expand the amount we recycle and help build stronger, more prosperous communities, which is a win-win-win for everyone,” said EGLE Materials Management Division Assistant Director Elizabeth Browne.

Knowing the rules of recycling

It’s easy to remember many of the tips suggested by EGLE’s raccoon expert on recycling metal — Precious Metale — on her webpage:

— Rinse and empty all metal containers. This means rinsing out containers so they are completely empty of food scraps, such as soup, prior to tossing them into the recycling bin.

— Aluminum, steel and tin materials should be clean before recycling.

— Empty aerosol cans are generally recyclable curbside, as long as they didn’t contain something hazardous, such as paint or chemicals.

Every municipality in Michigan has slightly different rules, though. Certain types of metal accepted in one city aren’t necessarily accepted in another. It’s important to routinely check with local recycling providers about what’s permissible in individual communities.

Those certain types of metal products that are not accepted curbside in most places can often be recycled at a drop-off location or special recycling event. Products of that sort include:

— Construction materials such as screws or nails, which are too small and fall through the recycling machines.

— Medical sharps such as needles and syringes, which are dangerous to recycling facility workers.

The campaign is a breath of fresh air for Michigan’s recycling leaders.

“People get excited because they have those big recycling carts with all that room, but when you’re throwing scrap metal or batteries in there, you can contaminate an entire batch,” said Galen Hardy, spokesman for the community organization Zero Waste Detroit.

Zero Waste Detroit works with the Detroit Department of Public Works to promote healthy methods of waste diversion, including keeping materials from being incinerated. Hardy said the city’s current recycling rate is only about 4%, a number he’d like to see get up to at least 30%.

“The Know It Before You Throw it campaign is smart, because it’s really good at encouraging the public to develop good recycling habits,” he said.