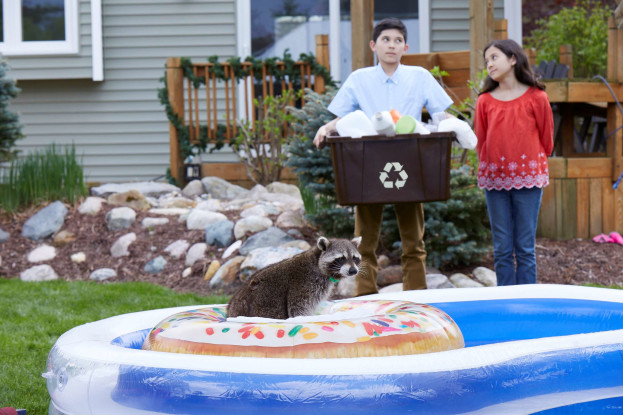 Ideas kept getting dumped into the proverbial trash bin for weeks.

But leaders of the Michigan Department of Environment, Great Lakes, and Energy (EGLE) knew immediately when they had finally recruited the perfect spokesperson for the state’s first-ever “Know It Before You Throw It” campaign to increase and improve recycling.

Turns out, the best person for the job of promoting the Know It Before You Throw It campaign isn’t a person at all.

It’s a raccoon – six of them, to be precise.

“As soon as we saw these adorable little creatures, we recognized instantly we had discovered the messengers to best help us educate the Michigan public on the do’s and don’ts of recycling,” said EGLE Director Liesl Clark.

The Michigan Recycling Raccoon Squad features six “talking” raccoons that each focus on a particular recyclable:

The raccoons’ “personalities” match their specialties – reflected by the purple mohawk on Precious, for example – and their goal is to help Michigan residents grow knowledge and improve their recycling habits.

“The current recycling rate in Michigan is just 15% – that’s the lowest rate in the Great Lakes, and among the lowest in the country,” said EGLE Materials Management Division Director Jack Schinderle.

“Our objective is for Michigan to reach a rate of 30% by 2025, and to ultimately reach 45% annually. The Know It Before You Throw It campaign is key to getting the word out about good recycling practices.”

A few simple rules
The Know It Before You Throw It campaign is part of a statewide recycling education and engagement initiative designed to increase both the quantity and quality of material that is recycled in Michigan.

Achieving EGLE’s 30% recycling goal would produce as many as 12,986 jobs, which translates into an economic impact of up to $300 million annually.

“By learning a few simple rules, we can elevate our rate of recycling, expand the amount we recycle and help build stronger, more prosperous communities, which is a win-win-win for everyone,” Schinderle said.

It’s easy to remember many of the tips suggested by EGLE’s raccoon expert on recycling plastics – Nyla P. Lastic – on her webpage:

Every municipality in Michigan has slightly different rules, however. Certain types of plastic accepted in one city aren’t necessarily accepted in another, so it’s important to routinely check with local officials about what’s permissible in individual communities.

Lights. Cameras. Raccoons.
One of the Know It Before You Throw It campaign’s highlights is a TV commercial featuring the Recycling Raccoons educating a homeowner on her recycling habits.

The 30-second ad quickly became a social media favorite after it was introduced June 24 to Michigan audiences, generating nearly 4,000 positive reactions and 2,500 Facebook shares over its opening two weeks.

The ad has also inspired civic organizations and environmental advocacy groups across the state to invite EGLE representatives to bring the Know It Before You Throw It mascots’ message to their communities. EGLE staff members are receiving more Know It Before You Throw It event requests than they can schedule this summer, so they’re booking presentations through the fall, Schinderle noted.

The commercial was filmed on a makeshift set at a Lansing-area home with two professional raccoon “actors” – George and Boomer – EGLE hired to play the roles of all six squad members.

“Boomer is very laid-back, so he was picked to play Nyla because he didn’t mind sitting in a plastic pool on an inflatable raft,” said Greg SmithAldridge, who served as animal wrangler for the shoot. Wranglers direct animal-actors to perform certain actions according to the script, similar to the duties of a movie director.

“It’s all about making it fun for the animal and making sure they want to be there,” said SmithAldridge, who has previously worked on such Hollywood film productions as “John Wick: Chapter 3 – Parabellum” and is currently engaged on a TV ad to sell season tickets for pro football’s Baltimore Ravens.

“You can’t convince a raccoon to do something if he doesn’t want to do it. At some point, he’s going to be just like, ‘OK, I’m done wearing these sunglasses.’”

SmithAldridge didn’t just help the raccoons with their behavior. He got a dose of positive recycling behavior modification himself and was surprised to learn plastic bags can clog the machines that sort recyclables.

“Just from looking at the script and being on set, I realized how bad my recycling habits were,” he said. “I’d been putting all my recyclables in plastic bags for years, but I didn’t know that was wrong. Since this Recycling Raccoons shoot, I’ve really changed up the way I do stuff at home and I realize that it’s really easy to improve.”

To learn more about the rules of recycling and meet the rest of the Recycling Raccoon Squad, visit RecyclingRaccoons.org.

Do NOT follow this link or you will be banned from the site!